Zen the Spider Lily (火祭のゼン Himatsuri no Zen), is the protagonist of Shinobido 2: Revenge of Zen. He was a member of the Fuka Ninja clan until the clan's destruction at the hands of two of his former childhood friends.

He seeks revenge against the traitorious Shu and Nagi for their murder of his beloved and crimes against their clan; he accepts an alliance with the Asuka ninja Zaji so he can stop Shu from claiming the Tenma Mirrors and make him face retribution by the blade.

Zen was presumably born in the Fuka Village somewhere in Sekishu, along with San, Shu, Nagi and Shizuku, and the five were trained since early age in the ninjutsu techniques of their clan.

He, along with Shu, served for a long time as houseguards of the House of Hojo, ruling family of Sekishu. Both had known Princess Sakuya from childhood and became friends since.

It's unknown if Zen participated in the war that claimed Shizuku's life. It's also unknown when exactly did he and San become lovers.

Sometime after this Shu confided to Zen his disgust towards war and conflict, and his intentions of retiring to find a more peaceful life. Zen believed his words then, unaware of what his friend was about to do to obtain the peace he desired...

One day Shu and Nagi rebelled against the Fuka, destroying village and fellow ninja alike and robbing the Gongen Mirror protected by the clan.

During their escape they were stopped near a bridge by San, who came to punish them as renegades. They warned her that her power alone would not be match to theirs but the kunoichi attacked anyways, resulting in a fatal slash wound from Nagi. Zen would shortly arrive to find his dying lover and his former friends' hands covered in her blood. Shu tells him of San's weakness and the Tenma Mirrors before burning San alive, blasting him with a fire blaze and throwing him off the high bridge into the river below.

He was found unconscious in a riverbank in Utakata territory by the Asuka ninja Zaji, who brought him to the Asuka Village to recover. Zen woke up three days later with the memory of his loss and the betrayal of his friends still fresh in his mind, and resolves to take revenge. He is initially surprised by Zaji, but after the Asuka explains him where he is and tells him of Shu's and Nagi's actions the past three days, Zen accepts the ninja's offer of an alliance with the Asuka clan.

Trained in the ways of ninjutsu since early age, Zen excels in ninja talents such as silent and swift movement, assassination techniques both armed and unarmed, knowledge and utilization of unorthodox tools, usage of mystic scrolls and close combat tactics.

In combat he shows preference for the use of a ninjato. His combat style favors fast attacks and agility, slashing at enemies with arcing movements of his blade. He can counterattack direct hits with ease, even capable of delivering a fulminant slash at enemies when they become vulnerable.

Separating him from most ninja is his potential in the deadly arts of Zankoku, which temporarily allow him to perceive the world as if time had stopped and instantly kill enemies, even large groups, in the blink of an eye. While initially unaware of his potential, he starts to develop his skill and learn new Zankoku during his stay in Utakata.

Zen is a very headstrong ninja, but he is also a man that finds it difficult to express his emotions, the loss of his connection to his childhood friends and the relocation of his ninja life leaves him very stoic. In some occasions he will lash out even to his allies if he thinks they hinder his revenge.

Zen will perform his ninja duty and in occasion compare life and war to the ephemeral nature of petals and leaves to the wind. For Zen most of social interactions he keeps conservative and only chooses to speak when he needs to, only truly expressing himself when he confront those that have wronged him.

Some of his dialogue before and after completing missions also hint at a confident personality.

Depending on the path the player chooses Zen can be a compassionate and caring fighter underneath his rough exterior, in occasions putting his own revenge on the side to save the lives of others. He can also be so deeply involved with the idea of getting equal and gaining power that he will step over the bodies of the friends that try to help him.

Depending on the ending obtained, he will find peace of mind and the capacity to forgive Shu at the end of his quest, or be driven insane by his obsessions.

Character's weapon designs. Zen's ninjato can be seen at the top-left

Zen and Kaede with alternate costumes 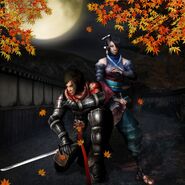 Zen and Kaede, the player characters of Shinobido 2
Community content is available under CC-BY-SA unless otherwise noted.
Advertisement