They are mission enemies in all games, appearing after reaching a certain point in the story.

Their personality is very stoic, militant and almost robotic, fitting their japanese title, which explicitly refers to them as an army.

The Taraba ninja rely on brute strength and hard-hitting weaponry. Covered in armoured suits and wielding flamethrowers, shoulder-mounted light cannons and underslung blades fixed to their forearms, the Taraba move exceptionally slowly (though, they can still jump as high as other ninja) and make a lot of noise as they do so, even when simply turning to look in a particular direction. This makes Taraba ninja easy to locate and monitor during the course of a mission.

The difficulty when confronting a Taraba ninja lies in direct conflict. Due to their heavy armour, they are well-defended and can withstand most of Goh's assaults. A Taraba ninja will not even flinch when taking damage unless performing the strongest offensive techniques. Fleeing from the Taraba proves difficult also, as their cannons can cause severe damage from a great distance. If encountering multiple Taraba ninja in direct conflict, the player's best chance for survival lies in escape.

Stealth killing a Taraba may also prove complicated, as similar to bears, they can only be stealth-killed from the back or the front. Also, if a Taraba encounters a corpse, they will incinerate it with their flamethrowers instead of disposing of it with a well, so their vigilance pattern is not as disrupted.

Taraba ninja will sometimes be seen working alongside their leader, Kabuto.

During combat, Kabuto fights with a similar style to the rest of the Taraba, with additional throws and two other weapons: his zanbato, which he usually throws at the player upon becoming alert, and an explosion of caltrops (the explosion itself is the most damaging part of the attack). The player is recommended to watch carefully for Kabuto's attacks, as he tends to "telegraph" some of them before execution, and time their counterattacks; another valid strategy is to "hit-and-run" if there's enough space, as Kabuto has difficulty matching the player's character speed.

Nothing is known of the Taraba's origins. At some point, they allied themselves with the evil spirit Gamuran, and together they exterminated the Asuka Clan, save for three survivors: Goh, Kinu and Zaji.

The Taraba, along with the Mosu and Kenobi clans, make their presence known in Utakata once the war breaks out to work as hired mercenaries. Their true mission, however, is to find the Soul Fragment containing Goh's memory of the necromancy scroll.

Due to their involvement with the Soul Fragments and Gamuran, and Kabuto's specific antagonism towards Goh, the Taraba have a more significant role in the story than other clans. See Storyline (Shinobido: Way of the Ninja) for details.

They make frequent appearances as enemies in various missions.

Kabuto is shown to have survived his last encounter with Goh during the first story mission. In said mission, the Taraba are hired by Akame to steal some secret documents from Sadame, but they are soon foiled by the Asuka, who get the documents back.

MORE TO BE ADDED LATER

The Taraba reappear as enemies in some missions after reaching Chapter 2. Unlike previous games, here they don't have any story importance.

No leader is featured whenever the Taraba appear, either they haven't chosen another leader after Kabuto's demise, or their current leader didn't accompany their clan to Utakata. 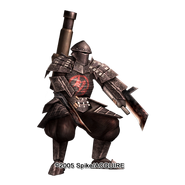 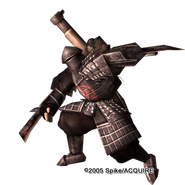