The Samurai Generals are each warlord's most highly valued retainers.

They control and command their respective lords' armies and offer tactical advice to benefit their forces during battle. Being veteran samurai warriors, they are all highly skilled in combat, sometimes wielding two katana at once, and are usually capable of defeating up to ten regular soldiers and even ninja in battle without assistance.

Initially, each faction begins with two generals, although more can be appointed should the player assist a particular warlord in gathering enough money and provisions to achieve a military build-up. The player must eliminate and/or protect these officers on various occasions to maintain the strength of, or severely damage, a warlord's military capabilities. Alternatively, the player may be contracted to protect one such officer from an enemy attack and instead slit his throat during the chaos if doing so would benefit his motives.

They are the targets of the most high-leveled assassination missions and protection missions. They are also only found on castle-type areas. 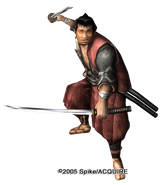