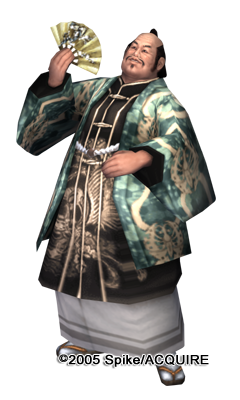 Fat, wealthy men in gaudy clothes (orange, cyan or white, depending on allegiance). They're the backbone of a warlord's funds, and so usually priority targets of both their lord and enemies.

As a result of their smugness, they don't make much effort in patrolling, usually content with strolling their surroundings or just staying on a single spot. They will also ignore the first signs of suspicion, unless it's a grave one (ex: explosions or dead bodies). Their greedyness also drives them to keep anything they find lying around, even if they don't need it. They often carry Money.

They're only seen in village areas unless it's a Rescue mission, when they will appear at mountains.

They are the target of low level Assassination, Guard, Escort, Kidnapping, mid level Rescue missions, and may appear as unrelated obstacles in village areas. They're also the ones to congratulate the player after completing some Transport missions.

They are playable as a skin model for Goh.

Merchants are very weak and clumsy. Their only means of attack are by firing their guns (which is easily blocked) or hitting with the handle of the same, and even then they tend to waste more time reloading or running. Like Village Girls, they are prone to tripping when running. If directly confronted, they will attempt to call reinforcements. However, it must be noted that their bullets can do significant damage if it hits, like the Riflemen, taking almost a 3/4 of the health bar in Very Hard difficulty.

If the player tries to distract them (ex: thrown sushi, hitting walls or stationary items), they will usually ignore the first attempt but investigate the second. They will not eat any edible items, but anything they pick up they will keep for themselves. They are easily stealth killed, as they scarcily pay attention to their surroundings (unless previously alerted).

Merchants remain mostly the same as in past games, with slight alterations to their character model.

Like before, they are playable as a skin for Zen.