Kabuto (冑 Kabuto, lit. "Helmet") was the leader of the Taraba Ninja. He is a story mandated boss and sometimes acompanies his clan in missions.

In combat, Kabuto fights much like the rest of his clan. His armor gives him impressive defense and can deal a lot of damage both up close (with his arm swings, flamethrower, zanbato and cleaver) and from afar (with his hand cannon or shooting caltrops), and can dodge pretty well. Unlike the rest of the Taraba, he also attacks by throwing his cleaver or zanbato to the player, if he connects the hit will cause considerable damage and knock them back a distance.

Nothing is known of Kabuto's or the Taraba clan past. Presumably he has been the master of the Taraba for some time.

When Gamuran's spirit was freed from the Asuka Shrine he somehow obtained the aid of the Taraba in the destruction of the Asuka Village. This is how Kabuto met Goh directly.

He and his clan, along with the Kenobi and Mosu clans, came to Utakata once the war broke to work as hired mercenaries. Unlike the other ninja leaders who mostly benefited from the war by monetary means or personal vendettas, Kabuto had more sinister motivations.

For the first part of the game his role is not much different from other ninja masters and can be fought for the Soul Fragments in some missions. It's during Goh's first return to the Asuka Village and his first meeting with Kinu that Kabuto reveals to both his role in the Asuka's destruction, his knowledge of Goh's betrayal and his intention of collecting the Soul Fragments before he tries to kill both ninja. He is defeated in combat by Goh and runs away.

A later cutscene, set in the Phantom Forest, reveals him as an ally of Gamuran. He is hunting for the Soul Fragments on Gamuran's behalf, but even then he doesn't seem to know exactly why other than the fact that Gamuran needs them to recover his lost power. Kabuto tries to betray his employer once, believing the soul fragment to be a magical artifact to control the sorcerer, he waves it in front of Gamuran while mumbling mock-incantations. Gamuran only becomes irritated and when Kabuto shoots at him he stops the bullets in midair and turns them against Kabuto, then chastises the ninja for his stupidity and orders him to find the Soul Fragment containing the secret of necromancy before the full moon.

Unbeknown to both villains, Kinu was spying them from a short distance away and managed to hear of both Gamuran's involvement and the full moon ritual.

Kabuto is one of the many ninja in Utakata Castle when the seventh Soul Fragment is revealed. While Goh, who at this point has been turned into a bear, Kinu, Usuba, Ageha and Uzumushi are distracted, he manages to obtain the Soul Fragment in the eye of the whale statue without much trouble.

He accompanies Gamuran to the Asuka Village during the full moon to witness the sorcerer's resurrection. When the remaining Asuka sneak to the shrine, unaware of Kabuto's presence, he aims at them from the roof of one of the houses and waits for Goh to pass first, when Zaji tries to do the same he attacks, shooting the ninja and then ordering his troops to ambush, stabbing him in the stomach and throwing him into a pile of sharpened debris but not before Zaji voices to Goh how he should have never trusted him. Zaji's fate differs depending on the path taken:

After this he turns to Goh, and mocks him with Zaji's words. Goh, furious, battles Kabuto to the death one last time. He murders the Taraba leader before facing Gamuran himself.

Kabuto reappears in the game as a boss in some missions, still the leader of the Taraba. Because of contradictions between this title and Revenge of Zen, his reappearance can be considered non-canonical.

By the time of Revenge of Zen he remains dead. While the Taraba are still active and appear as enemies in some of the missions, it's not shown if someone took the position of master after Kabuto's demise.

Like the Mosu, Kabuto shares similarities to his troops in combat: His armor provides him with defense against most attacks and invulnerability to some weapons such as shurikens and kunais. He displays prodigious strength in his ability to run, jump great heights and quickly dodge while still wearing heavy armor and equipment and also being capable of launching enemies into the air with just a swing of his arm.

He essentially carries an armory with him at all times. Besides the standart issue weapons of the Taraba such as the blade gauntlets, cannons (his is mounted in his left arm) and flamethrowers (unusually, his is mounted inside his mouth), he also carries a cleaver in his right arm to attack and launch as a throwing weapon, a zanbato which he uses the same way as his cleaver and a dispositive in his armor allows him to shoot caltrops like bombs.

At the same time, as with all the Taraba, his bulky and noisy armor doesn't allow for any stealth tactics. He sticks out anywhere he is.

For a ninja master, Kabuto is little more than a bloodthisty brute. He took great enjoyment in the genocide of the Asuka clan and thretens to murder Goh and drag his severed head around town whenever he sends a duel challenge to him. His sadism also shows in his ambush of Zaji, not only did he wait for Goh to pass unharmed before attacking so Zaji would believe himself betrayed again, but he also injured him him in a very painful manner and tried to kill him by impalement into sharpened debris.

He enjoys the suffering of others, as his actions towards Zaji and Kinu attest, and continually taunts Goh for his (unwilling) betrayal and failures.

Also, while not as much as Uzumushi or Hebitonbo, he shows himself to be rather stupid by trying to turn against Gamuran, an ancient and powerful sorcerer even in his weakened spirit form, by shoving a Soul Fragment around like some kind of magic tool without even knowing how it works. 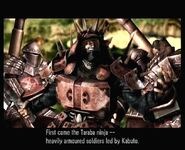 Kabuto with the Taraba Clan
Community content is available under CC-BY-SA unless otherwise noted.
Advertisement