Hebitonbo (蛇蜻蛉 Hebitonbo) was one of the two leaders of the Kenobi ninja along with Uzumushi. After his death, Uzumushi became the sole leader of the Kenobi.

He is a story-mandated boss in the first game, and sometimes accompanies his clan in missions.

He was presumably born in the Oshu province, located in the interior part of Japan. It's unknown when exactly did he join the Kenobi, met Uzumushi or became one of the clan's leaders.

Shinobido: Way of the Ninja[]

He along with Uzumushi and the Kenobi Ninja, to Utakata once the war broke out to make money as mercenaries for hire.

During their time in Utakata, they hear of the Asuka Ninja and their reputation as assassins and spies without equal. The Kenobi as a whole quickly grow jealous of the Asuka, and plan to rob them of their reputation. During a kidnapping operation, they are fooled by Kinu, but instead of reporting their failure Hebitonbo decides to kidnap Kinu to demand a ransom. He sends Goh a letter demanding him to meet them at the watermill in Ryonin Market with all his money and possessions.

While waiting for Goh to arrive, Hebitonbo is shown torturing Kinu by tying her to the spinning watermill. When Goh arrives, the Kenobi leaders order him to leave his posessions on a nearby boat, but Goh silently challenges them instead. A battle quickly ensues in which Goh proves victor and demands for them to free Kinu. Defeated, they Kenobi comply, but Hebitonbo can't reach Kinu's bounds, so he grabs onto the watermill which promptly spins and traps him underneath, drowning him. A distraugh Uzumushi can only watch as his friend dies, and before fleeing the place swears to take revenge upon both Asuka.

Hebitonbo is buried in the forests of Utakata. His makeshift grave is accidentally knocked over by Uzumushi's flail as he turns to leave.

Shinobido: Tales of the Ninja[]

Hebitonbo's twin brother appears during one special mission. He convinces a doubtful Uzumushi to attack a farmer village in the outskirts of Utakata, under the misguided rationale that all ninja villages are hidden as farmer villages, so it must be an Asuka settlement. The three Asuka investigate the village and Goh finds both leaders still wandering inside. They battle, and Hebitonbo II is killed. Uzumushi leaves after this, and weakly claims he will kill Goh someday.

While he doesn't appear in person, Hebitonbo is given mention in this game. Uzumushi, having returned once again to Utakata, is frequently seen accompained by a dog named after his deceased friend. The credits roll also show Uzumushi and his pet looking at the moon, with an image of Hebitonbo reflected on it's surface.

For a Ninja Master, Hebitonbo has the personality of a common thug. He is shown to be violent, impulsive and arrogant, as shown in the Kenobi intro when he kills a random villager in an overly-showy fashion to later discover the man was their client. He is also sadistic, exemplified not only by his intro but also by his unnecesary torture of Kinu.

His greatest flaw, along with his impulsiveness, is his lack of awareness and common sense, which end up causing his death when he accidentally traps himself under a watermill.

Though, he is shown to have a kind side through his genuine friendship with Uzumushi. Both are shown to care about each other's wellbeing.

Hebitonbo wields an unusual weapon, a retractile Snake Blade mounted inside his gauntlet, with relative ease. In one cutscene he uses it in a brutal and unnecesarily showy fashion, but in actual combat limits himself to repetitive and quick attacks meant to keep enemies at distance.

For some reason he doesn't display any of the ninja skills of the rest of his clan, and unlike Uzumushi he doesn't even get the excuse of a heavy body build. It's possible that because of his stupidity, arrogance and impatience, he forewent any training in favor of depending solely in brute force.

Though despite his limited intelligence, he's more malicious than Uzumushi, thus he's the first to come up with their more devious plans. Unfortunately for him, he choose to pick a fight with a ninja leagues above him, Goh. 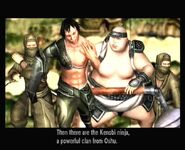