Goh the Crow (鴉のゴウ Karasu no Gō) is a ninja of the defunct Asuka Clan. He is the protagonist of Way of the Ninja and Tales of the Ninja. He is one of the three remaining members of the Asuka Clan, the others are Zaji and Kinu.

The Asuka, and Goh in particular, are known across Utakata as fearsome warriors and spies who strike from the shadows undetected. For this reason, all three warlords want him on their side, promising him peace, power, money and information on the missing Soul Fragments.

Despite his previous protagonist status he plays a very minor role in Revenge of Zen, appearing only after completing a special questline. This can be missed if the player interrupts the questline chain (accepting other missions before completing all the quests).

Goh was presumably born in the Asuka Ninja Village and trained all his life in the arts of ninjutsu. One day he, along with a reluctant Kinu, went to investigate a small old shrine in the Asuka Village. When he opened and removed the sacred sword within, evil energy started to come from the shrine, engulfing Kinu's arm and forcing him to cut it at her urgings then closing the shrine. The evil spirit, Gamuran, had already escaped however. After this he became increasingly influenced by Gamuran, which could have affected his judgment when he murdered Tateha during a clash between their clans, and when he revealed clan secrets and weaknesses to Gamuran himself.

Some time later, Gamuran returned to the village with an army of Taraba ninjas, razing it to the ground searching for a scroll which could grant total dominion over necromancy, scroll that had been guarded by the Asuka for 900 years. While on Gamuran's side at first, as Zaji witnessed, he snapped and ran looking for his master. He found him dying, and with his last breath instructed Goh to find and destroy the necromancy scroll, which he intended to but read it himself before doing so; Gamuran cornered him shortly after, ordering him to hand over the scroll, instead he threw it into the fire. To this the sorcerer responded by casting a spell to separate Goh's soul into eight jewels, now containing his memories of the scroll's secrets, with the intent of finding them first.

Shinobido: Way of the Ninja[]

Goh is the protagonist and point-of-view character of this game, thus the game's story can be said to be his own.

By dawn an amnesiac Goh awakes in a forest and confused finds an abandoned hut. While investigating the hut an arrow hits a nearby wall, a letter tied to it instructing him to look for his "father" in Utakata Castle. He storms the castle and interrupts unsuccesful negotiations between Lord Ichijo and Sadame, claiming to be looking for his father, to Ichijo's confusion and Sadame's amusement. Sadame leaves and Ichijo orders him out, so Goh returns to the hut alone without clues to his past. Another letter from the previous sender shows up, the author indentifying himself as Onji, tells him that he meant father as a "fatherly figure", as Ichijo used to be to him. The letter informs Goh that his memories and soul have somehow been stolen and placed within eight mystical stones, the "Soul Fragments", which were scattered during the initial attack on the Asuka Village, and then further scattered by people who have located and claimed the stones. Onji also advices him to plan his decisions calmly and do as he sees aproppiate for his goals.

Goh obtains the first two Soul Fragments during missions assigned by the warlords, regaining some of the memories of his clan's destruction. Since the land has lost the protection of the Asuka and has become increasingly war-torn, three ninja clans enter Utakata looking for mercenary work and to fulfill personal missions: The Kenobi, Mosu and Taraba Ninja.

Goh is confronted by the Mosu leaders Usuba and Ageha during a mission. They claim their desire of revenge against Goh for his murder of their sister Tateha but Goh tells them he cannot remember, the Mosu leaders attack regardless but are defeated, Goh lets them escape but the twins assure him they will kill him if the opportunity arises.

During another mission Goh is confronted by Zaji. The enraged Zaji seeks only to kill Goh, a clan traitor as far as he knows. Despite his confusion at the unknown assailant he repels the attack, and Zaji uses a smoke bomb to espace without answering Goh's questions.

Later a mission takes Goh back to the destroyed Asuka Village, where he meets Kinu. While the kunoichi does not attack him, she also is wary of him and surprised at his lack of memories. Soon they are attacked by Kabuto and his troops, the leader revealing his role in the village's destruction. Goh and Kinu team up against Kabuto and emerge victorious, the Taraba flee and Goh obtains the fourth Soul Fragment, regaining his memories of Kinu and Zaji. He asks for Kinu's help but the kunoichi refuses and leaves.

He is attacked by Zaji soon after this. This time he tries to reason with his former clan brother but he refuses to listen. Goh fights Zaji to a standstill before the latter escapes once again.

Unbeknown to Goh, Kinu is captured by the Kenobi during a sabotage mission. They send a ransom letter demanding him to take all his money to the instructed point in Ryonin Market, by the side of the watermill. He arrives and finds Uzumushi and Hebitonbo torturing Kinu with the watermill. The leaders order Goh to leave his money and belongings in a nearby boat and stay at distance, but he stands in the boat himself, challenging them. The ninja battle, with Goh victorious against both. He demands the Kenobi leaders to release Kinu, and they do so. Hebitonbo goes to the watermill and tells his friend to escape meanwhile but after struggling to reach Kinu tries to pull the watermill with his full body weight, turning it but trapping himself underneath and drowning to death while his friend watches helplessly. Distraught, Uzumushi blames both Asuka for Hebitonbo's death and swears to take revenge before leaving. The Kenobi leave behind one of the Soul Fragments, Goh takes it before Kinu can stop him, regaining the lost memories of his own betrayal. He once again asks for Kinu's help in his atonement for the betrayal, this time she accepts.

See Storyline (Shinobido: Way of the Ninja) for full details.

Goh and Kinu get a mention during the intro scene of Revenge of Zen. Zaji explains to Zen that he's currently the only Asuka in the village, as Goh and Kinu are on a mission on foreign lands (possibly Sekishu).

Goh possesses mastery over the ninjutsu arts of the Asuka Ninja, even while amnesiac. This allows him to excel at silent movement, quick and effective techniques of assassination both armed and unarmed, close combat and knowledge and usage of ninja tools. He is also capable at many different mercenary jobs of his trade.

As part of his training as an Asuka Ninja, he also has knowledge of Alchemy and the identification (and possibly the cultivation of) different medicinal and poisonous plants and mushrooms.

In gameplay, Goh gets the distiction of being the character with the biggest combat moveset (along with Zaji, who shares this moveset), amplified by his ability, as the player character, to use all tools available in the game.

Coupled with this is his ability to instantly kill unsuspecting enemies, hide in the shadows undetected and navigate the map silently (as long as the player is careful).

In comparison to the other player character, Kinu, he is not as speedy and his jumping height and reach is notably lower, but compensates with better strength, durability (HP) and wider moveset.

See also Combat and Items (Shinobido: Way of the Ninja).

While it's true that during the events of the game Goh shows a noble face, he had also comitted several heinous and irresponsible acts, such as unsealing Gamuran and cruelly murdering Ageha's and Usuba's sister. However, he seems to deeply regret those actions, sparing Zaji twice, both Ageha and Usuba, fighting to save Utakata from Gamuran, and remaining a loyal member of the Asuka Clan.

Gameplay aside, cutscenes demonstrate that Goh is somewhat averse to murder unless neccessary. He spares both Usuba and Ageha when they try to kill him, and Uzumushi and Hebitonbo even after they torture and hold Kinu for ransom. Only one of the ninja masters is killed by him, Kabuto, and this is after his discovery of Kabuto's involvement in the destruction of the Asuka, his repeated attempts at killing Goh and his (possibly succesful, depending on the ending) attempt at killing Zaji.

Onji is the first person who found Goh after the Asuka massacre, and guided him along the confusion caused by his amnesia. For most of the game, Onji serves as a mentor figure to Goh, and in return Goh trusts Onji, even if they don't meet personally. Onji's revelation of his identity and past solidifies their bond, but sadly by this point Onji is losing himself to his curse, and next time they meet he's been reduced to a cat in mind. Still, his last acts are to give a final written advice to Goh, and later save Kinu during their fight against Gamuran. Goh asking for Onji's condition at the end of the game and his reaction at Kinu's answer make their friendship more evident. In subsequent games, a cat named Onji is seen inhabiting Asuka Village; it may be another cat named after the man, or the same Onji, now permanently a cat in body and mind..

The Mosu sisters hold a strong personal grudge against Goh for the death of their sister Tateha. It was this grudge the main reason for their return to Utakata, and during their stay they do everything possible to claim revenge against Goh, but he foils their attempts every time. They seem to target Goh exclusively, as they don't go after Kinu or Zaji despite them being Asuka too. After Ageha's death, Usuba abandons her revenge and her pursuit of Goh, but remains enemies with his clan.

Kabuto enjoys provoking Goh for his role in the Asuka Village's destruction. While his sadism extends to everyone he confronts, Kabuto goes to extra lenghts to anger Goh. The greatest display of this is during the final mission, where he waits until Goh sneaks safely to attack Zaji, and then rubs the resulting "act of betrayal" in Goh's face.

Onji mentions how Ichijo and Goh used to have a close relantionship, similar to a father-son bond. While Ichijo makes obvious his desire to conseve such bond (as long as Goh is not his enemy), Goh seems uninterested even after he recovers his memories. Even if the player allies exclusively with Ichijo, their relationship still remains impersonal. 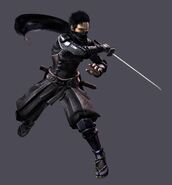